SuperBase Pro has raised nearly $1M USD in crowdfunding and earlier received a Good Design award in Japan and an iF Design Award in Germany. 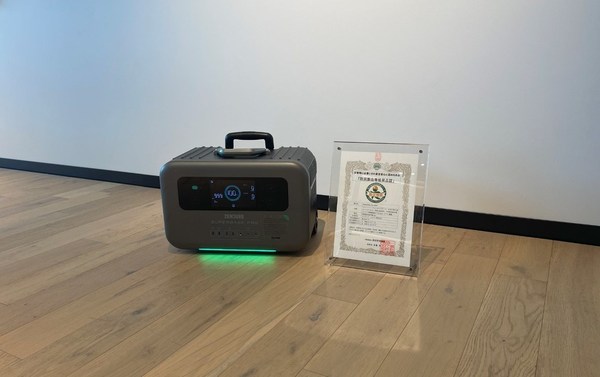 The Bousai mark identifies products that the organization recommends for emergency preparedness based on safety, functionality, and convenience.

In recent years, many people have added a portable power station to their emergency preparedness kit. Unlike a traditional gas-powered generator, a rechargeable power station does not require fuel and has fewer moving parts, lowering the cost and effort associated with maintenance. Since they don’t burn fuel, most power stations are safe to use indoors, inside a car or van, or even inside a tent.

SuperBase Pro is Zendure’s largest power station. It can quickly be charged up to 80% in just one hour. With 2,000W pure sine wave AC output and up to 4,000W of surge power, Zendure’s power station can start and operate large appliances, including many residential refrigerators and freezers.

Zendure’s power station is solar friendly, so even if a disaster weakens crucial infrastructure, users can collect solar energy and power their essential devices. Photovoltaic arrays of up to 1,800W are supported by SuperBase Pro.

SuperBase Pro has 14 output ports (12 in the EU model), plus a companion app that can control the inputs and outputs, track the power station’s location, and even keep track of carbon offset through the use of sustainable energy. This is all possible thanks to the power station’s built-in Wi-Fi, 4G, and GPS hardware.

The new power station is an ideal emergency power supply. The batteries only need to be charge-cycled once every few months to maintain the health of the device, and it has industrial-grade wheels and a built-in extending handle for easy carrying.

SuperBase Pro raised nearly $2M USD in crowdfunding and recently earned a Good Design award in Japan and an iF Design Award in Germany. The power station has been especially popular in Japan, where it recently brought in over ¥49M on the crowdfunding site Makuake.

SuperBase Pro 2000 has already been distributed to hundreds of backers. SuperBase Pro 1500, which contains LiFePO4 batteries, has just begun mass production in preparation for worldwide distribution.

SuperBase Pro 2000 can be ordered from Zendure.com, with delivery to the US projected for the end of May.

Zendure is a portable power company with a focus on sustainable energy located in Silicon Valley in the United States and the Guangdong – Hong Kong – Macao Greater Bay Area in China. Since its establishment, Zendure has continuously launched innovative products, made rapid breakthroughs in the core technologies of energy storage and power supplies, and continues to bring pleasant surprises to the user experience. The company recently received a multi-million dollar series-A round of funding through a joint investment from Shanghai GP Capital and YOTRIO group.