MUNICH, Dec. 25, 2021 /PRNewswire/ — As households around the globe celebrate the holiday season, Yadea (01585:HK), the world’s leading electric two-wheeler brand, has joined the festivities with its very own Christmas-themed short film. Released via Yadea’s social media channels on the day of Christmas, the whimsical video brings season’s greetings to Yadea’s global network of riders bringing the holiday spirit into the era of green. 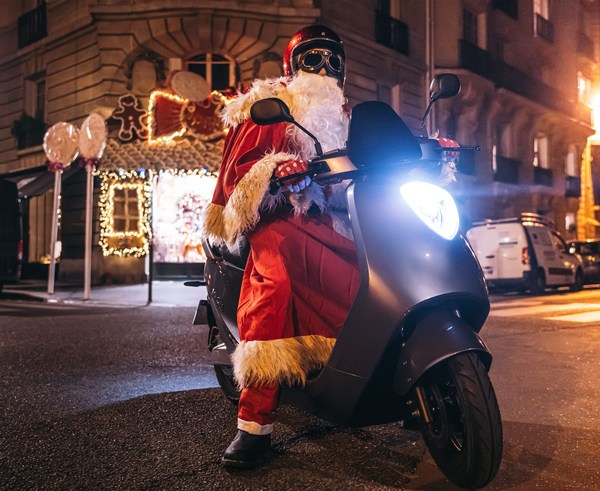 Yadea released its very own Christmas-themed short film via its social media channels on the day of Christmas.

In the Christmassy video, Santa can be seen around the streets and landmarks of Paris on Christmas Eve delivering gifts. Of course, for Santa, it is absolutely key not to get noticed by children, particularly in Europe where cities are trying to tackle noise pollution. Good old-fashioned reindeer just don’t cut it anymore – which is why Santa has discreetly chosen the Yadea C1S electric motorcycle his transportation of choice in the festive film, allowing him to quickly and quietly go about his business unnoticed by a single soul on the streets of the French capital on Christmas Eve.

A sporty and refined ride, Yadea’s noise-free C1S is ideal for anyone who wants to take after Santa and zip around urban settings. With a Red Dot Award-winning KISKA design and a generous 25L of storage space, Yadea C1S looks great on the roads and offers ample room for storing gifts or other cargo. And, while Santa chose the grey model to avoid detection on the streets, the electric motorcycle is also available with a coat of Beckers paint in candy cane Red, Blue, White, and Black – allowing riders to express their personality on the road.

Delivering billions of presents in a single night is daunting, which is why Santa needs the best performance and battery life possible. With a GTR 3.0 high-performance motor, the C1S packs plenty of power, while also being whisper-quiet. It features a Panasonic 18650 lithium battery with expandable dual battery support – enabling drivers to go further on a single charge. No matter the conditions, families are counting on Santa to deliver gifts on time. Again, the Yadea C1S excels: with IP57 waterproofing, a C-level brightness Yadea Gene Headlamp that shines brighter than Rudolph’s nose, and motorcycle-level hydraulic shock absorption. What’s more, the C1S is as dependable as a fleet of reindeer: with Yadea’s intelligent power management system, the battery offers nine levels of safety protection against overcurrent, overcharge, short-circuit and more.

Since its release, Yadea’s Christmas-themed film has been shared by netizens and garnered newfound attention for the C1S electric motorcycle. Additionally, Yadea also shared a series of festive posts across social media as the holidays neared, including an Instagram post-a vinyl record-player-shaped music box playing Christmas-themed music inviting followers to share their most cherished Christmas memories.

“We want to wish all members of the Yadea community a Merry Christmas, no matter where they’re celebrating around the world. We hope that Yadea can accompany you on a holiday season filled with joy and happiness as electrifying as your Christmas,” said Aska Zeng, General Manager of Yadea.

About Yadea
Yadea is a global leader in developing and manufacturing electric two-wheel vehicles including electric motorcycles, electric mopeds, electric bicycles and electric kick scooters. To date, Yadea has sold products to 50 million users in over 80 countries, and has a network of 35,000+ retailers worldwide. With a mission to help people “Electrify Your Life”, Yadea continues to invest in R&D, production and global expansion to build a shared and sustainable future for mankind.