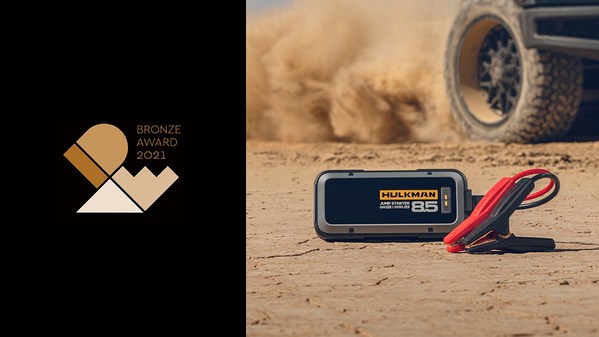 Hulkman has achieved this recognition because of its commitment to precision and quality. The Alpha 85S and Alpha 100 can boast a 99.9% jump start rate, while also boasting a -40°F operating environment, giving users extreme confidence and assurance in knowing that the jump starter will work in times of need. The jump starter was internally tested on 500+ vehicles from more than thirty brands.

For users who intend to keep the Hulkman in their vehicle or garage “just in case”, the jump starter has been designed to hold a charge for up to eighteen months.

A spokesperson for Hulkman said, “We feel honored IDSA has given us this award. Extreme performance and intuitive design are two key principles that we live by, and are delighted to offer consumers new solutions  through our innovation.”

As well as receiving IDEA recognition, the Alpha 85S has received many positive reviews, including more than 3000 5-star reviews on Amazon. Additionally AutoGuide, for example, recognizes it as one of the best jump starter products. 9to5Toys said, “The Hulkman Alpha 85S Jump Starter is a revolutionary design that everyone should have in their home or car.”