SHENZHEN, China, Dec. 27, 2021 /PRNewswire/ — HAI ROBOTICS, a global leader in Autonomous Case-handling Robotics (ACR) systems for warehouse order fulfillment, is celebrating its fifth anniversary at its new headquarters as it ranks among global unicorns according to this year’s unicorn ranking list from the Hurun Research Institute. 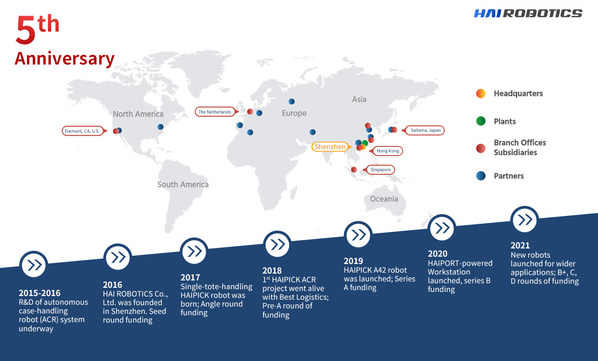 The company, a logistics warehousing automation solution provider that secured three rounds of funding in 2021, was nominated along with 300 other Chinese start-ups which were valued at more than US$1 billion as of November this year in a global list totaling 1,058. The list was released last week.

HAI ROBOTICS was founded in late 2016 by a group of like-minded robot enthusiasts who aspire to create value for every warehouse and factory with the vision to push forward human civilization through robotics technology. The company’s birth originated from a revolutionary idea that took shape as early as 2015 – the totes-to-person solution – to improve warehouse operational efficiency, instead of creating a homogenous brand of the then prevalent shelves-to-person material handling.

The solution underwent repeated tests and trials in a real warehouse environment for nearly two years before it was formally introduced into the market. The company’s first project was successfully deployed in Best Logistics’ warehouse in August 2018. Soon the story went viral with great exemplary effect that the ACR solution swiftly secured footholds in factories and warehouses.

“It’s an extraordinary journey for us to grow from the cradle of a small workshop into a company of more than 1,200 employees with five branch offices across the globe today,” said Richie Chen, the company’s founder and CEO. “We’re celebrating our fifth anniversary with gratitude to our customers and investors for their trust and confidence in our team. We’ll keep making innovative products and stay committed to bringing value to our partners.”

Automating a warehouse can be a huge project worthy of careful consideration for any business operator. The concerns could range from the length of necessary deployment time, agility of refitting, affordability to ROIs. The HAI ROBOTICS team kept their users’ concerns in mind when building their products. Hence, they kept refining their ideas and fine-tuning the HAIPICK robots for wider applications and stricter storage requirements.

First and foremost, the HAIPICK ACR solution allows greater space utilization and higher goods-handling precision and efficiency than traditional Goods-to-Person solutions, such as Kiva robots that move an entire rack. With the HAIPICK ACR solution, a warehouse’s storage density can be boosted by 80% to 400% and a worker’s picking speed can be improved 3 to 4 times. In addition, the HAIPICK robots, using QR codes on the floor for navigation, can be deployed within one month with no altering of the interior structure of a warehouse.

Thanks to its easy deployment and flexibility, the solution has been adopted by a wide array of customers who prefer smaller picking units than an entire rack or pallet when automating their warehouses. So far, HAI ROBOTICS has been running more than 300 projects globally in various fields, including e-commerce, 3PL, apparel, electronics, energy, manufacturing, medicine, and more. To provide localized service overseas, it has partnered with dozens of global logistics and supply chain leaders, including LG CNS, MHS, MUJIN, BPS, Savoye, Invar, SSI Schaefer and more.

HAI ROBOTICS, a trailblazer of Autonomous Case-handling Robot (ACR) systems, is committed to providing efficient, intelligent, flexible, and customized warehouse automation solutions through robotics technology and AI algorithms. It aims to create value for each factory and logistics warehouse.

The HAIPICK ACR system, independently developed in 2015, is the world’s first of its kind.

Founded in 2016 with headquarters in Shenzhen, China, HAI ROBOTICS has set up five subsidiaries in Hong Kong SAR, Japan, Singapore, the U.S. and the Netherlands, serving customers from more than 30 countries and regions. It now has over 1,200 staff, more than 50% of whom are engineers. The company has acquired more than 600 global patents for core intellectual properties involving positioning, robot control and warehouse management. In the latest C and D rounds of funding in 2021, the company raised over US$200 million in total.