HOUSTON, Jan. 12, 2022 /PRNewswire/ — Ascend Performance Materials announced today it signed an investment agreement to construct a new hexamethylene diamine and specialty chemicals plant in Lianyungang, China in the Xuwei New Area Park. The new plant will be Ascend’s first chemical production facility and the largest investment the company has made outside of the United States. 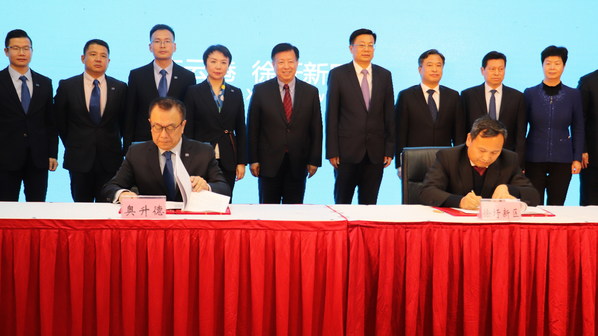 The plant will produce HMD and specialty chemicals to supply Ascend’s global polyamide production and serve its regional customers.

“Our growth is driven by increasing market demand and growing collaboration with our customers globally,” said Phil McDivitt, Ascend’s president and CEO. “The materials we produce are helping drive technological transformations across markets, from e-mobility to automation. Our new HMD plant positions us to continue supporting these transformations well into the future.”

Ascend, a fully integrated producer of durable engineered materials, serves a variety of sectors including automotive, paints and coatings, electrical and electronics, consumer goods, and cable ties and fasteners.

“China and Asia remain high-growth markets for us,” said Dr. Kevin Wu, Ascend’s senior vice president and managing director for Asia. “This new plant is a symbol of our growth in the region and the partnerships we have developed. We thank the Xuwei New Area Park administrators and the officials in Lianyungang for their partnership in this project.”

Ascend signed a memorandum of understanding in November 2020 during CIIE in Shanghai with Xuwei New Area Park, witnessed by the leaders of Jiangsu Province and Lianyungang.

Ascend will begin construction later this year with a plant startup targeted for the second half of 2023.

The announcement of the new site construction follows a series of acquisitions and capacity expansions to enable regional growth and continued global supply security. In 2018, Ascend made its first acquisition in Tilburg, Netherlands, followed by acquisitions in Mozzate, Italy; Suzhou, China; and Fosses, France. Ascend will also complete an acquisition in San Jose Iturbide, Mexico and the construction of Ascend Asia Innovation Center later this year.

Ascend Performance Materials makes high-performance materials for everyday essentials and new technologies. Our focus is on improving quality of life and inspiring a better tomorrow through innovation. Based in Houston, Texas, and with regional offices in Shanghai, Brussels and Detroit, we are a fully integrated material solutions provider with nine global manufacturing facilities in North America, Europe and Asia. Our 2,600-person global workforce makes the engineered materials, fabrics, fibers and chemicals used to make safer vehicles, cleaner energy, better medical devices, smarter appliances and longer-lasting apparel and consumer goods. We are committed to safety, sustainability, inclusion and diversity, and to the success of our customers and our communities.

Learn more about Ascend at www.ascendmaterials.com.